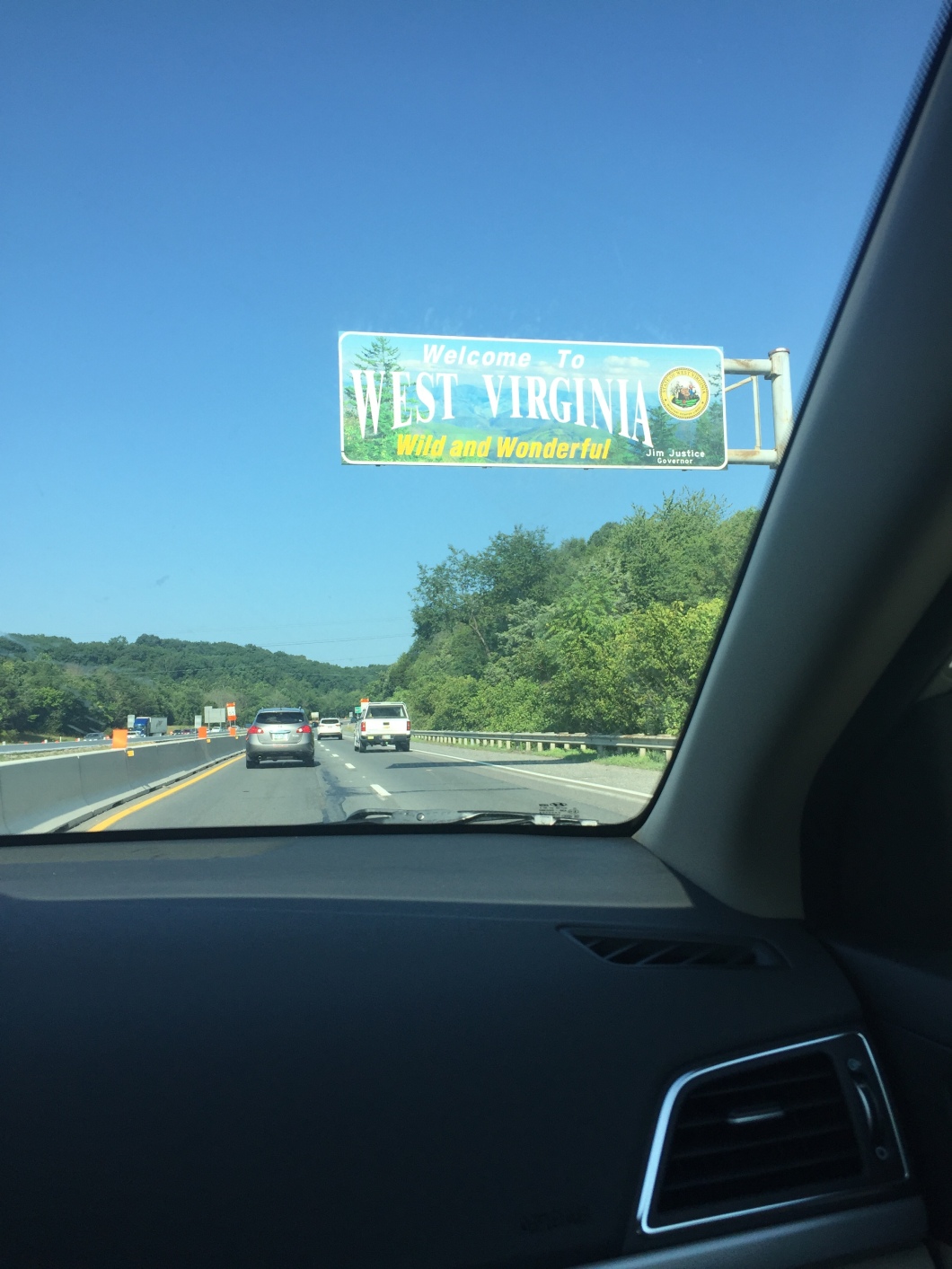 [Image description: Outside of a car interior, there is a blue sign that says “Welcome to West Virginia: Wild and Wonderful” in white. The inside of the car is black. Outside, the sky is blue and there are trees. Other cars are on the road.]

I’m a very big fan of anniversaries. Even if they’re just a week after something happens. Keeping track of time grounds me. And being a writer, I keep track of where I was at certain points by reading my old writing. So earlier today, I read through a few old blog posts and realized, “July 31stwas the day I moved to Asheville.” I’ve been at this thing for a year.

July 30thlast year, our cars were packed up with all of my possessions. I had just had an anxiety-ridden summer (read: year, life?) up until that point, and for all intents and purposes I was driving into hell. That’s how bad I was feeling. I had this terrible, sinking feeling that there was no going back on this horrible decision and trust me, I thought of several exit plans earlier in the summer. But I had no choice except to step off of the diving board and fall 4,000 feet. At one point on our drive, I had such horrible stomach cramps from anxiety that we had to wait at a rest stop for an hour. I was scared I’d shit my pants. But I held it together long enough for us to get to Asheville.

Earlier today, I wrote that moving to Asheville was one of the hardest decisions I’ve made. It was. It was the hardest decision I’ve ever made. I had not been to Asheville, North Carolina until all of my stuff, my family and I got there on July 31st, 2017. And up until probably January 2018, I was constantly crying and having panic attacks from homesickness and slight regret. I moved away from my family, my friends, my cat, my hometown, my college town, and the person I was dating (which ended up being me dodging a bullet so at least that worked out but it didn’t actually so never mind). I felt like I was starting from ground zero with this new life. And keep in mind; I hadn’t lived on my own before. I hadn’t paid all my own living expenses and I chose to do that for the first time 700 miles away from home, so this shit really had to work. There was no net under my tightrope, or so it seemed.

We’ve established this many, many times over, but I don’t give myself enough credit. I found out I’m an enneagram type one and that was very apparent when I moved. I moved to AVL, started my first job and went through a HORRIBLE LOL breakup in the span of my first few weeks in the south. And yeah, that was awful, but I did it. I really did it! I survived to be on the other side. Asheville was in fact so okay that I’m choosing (I guess) to stay for a while.

There’s a lot I could say about this past year, but really, y’all have been following along the entire time. I’ve documented all of it. My first blog post was when I was getting ready to move—my second was after my first day at my fellowship. Well, today was my first day at my next job. It’s been humbling to document this past year. And after my last blog post, feeling kind of down on myself, reading my posts thus far reminded me how much I’ve done and how much I’ve grown in the past year.

And while I’m on the point of anniversaries, it’s been almost a year since the day I met my current partner. We met the day before my first day at UNCA. And the day before that, I got my ‘grace’ tattoo. Next week, he’s flying up to New York (!) to help me drive back to Asheville to move into my new house. I try to stay pretty mum about my relationship (I said several times on this website that I wanted to stay single and that was a big joke) but I often think of how this relationship is an indicator of time passing and growth. A year ago, we didn’t know each other (when we recorded for my website, we didn’t think we’d date….yes, that’s who that is) and next week, he’s flying up here to help me drive back “home.” Isn’t that wild?